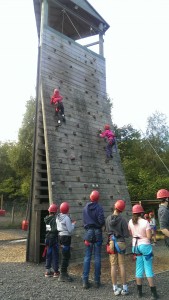 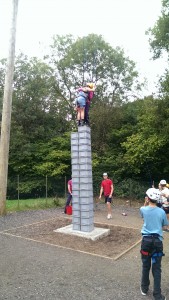 Scouts are the third section of the Scouting movement. From the first experimental camp for 20 boys in 1907, the movement now has an estimated 28 million members worldwide, and in the UK alone there are over 499,000 boys and girls involved in Scouting. An increase in adult volunteers means that more and more young people are now able to take part in their own big adventure.

The Scout Section has existed since Scouting began in 1907. Though the Section has gone through many changes its values and fundamental principles have remained unchanged. Today there are over 100,000 Scouts in 6,600 Troops across the UK.

Who is the Scout Section for?
Scouts is open to young people aged between ten and half and fourteen years old who want to join and can make the Scout Promise.

Scouting differs from many organisations in that it requires its Members to make a Promise. The Scout Promise is the same for Scouts, Explorer Scouts, Members of the Scout Network and adult Members of the Association. It is:

On my honour,
I promise that I will do my best
to do my duty to God and to The Queen,
to help other people
and to keep the Scout Law.

Different wordings of the promise are available for those of different faiths who may prefer not to use the word “God” and for those with special needs and circumstances. By making the Promise a young person becomes a Member of the worldwide Movement; they become a Scout.

The Scout Law is a set of ‘rules’ that Scouts should do their best to live their life by. They are
based on the Laws that Baden Powell came up with, but have evolved to reflect changing times.
The Laws are:

1. A Scout is to be trusted.
2. A Scout is loyal.
3. A Scout is friendly and considerate.
4. A Scout belongs to the worldwide family of Scouts.
5. A Scout has courage in all difficulties.
6. A Scout makes careful use of time and is careful of possessions and property.
7. A Scout has self-respect and respect for others.

The Motto for all Members of the Movement is: Be Prepared.

Scouts wear a teal coloured shirt. They will also wear a scarf (sometimes called a “necker”), the colour of which varies from Scout Group to Scout Group. They will also have a leather woggle, to keep their scarf up. Activity trousers and a Scout belt are also parts of the Scout uniform and there are several optional items available as well!

An Introduction to the Scout Section

How are Scouts organised?

Scouts meet together as a Troop and work within a variety of small groups called Patrols. A Scout called a Patrol Leader leads the Patrol. The Patrol Leaders work with the Leadership Team in setting the programme and in decisions affecting the Troop. The Patrol system is one of the important ways that young people can take responsibility for themselves and others. A volunteer leadership team made up of uniformed Leaders and other informal Assistants and helpers will guide the Troop. Explorer Scouts who are Young Leaders might also assist the leadership team in the Troop.

Making the Promise is the most important act in Scouting and is common to every section. Scouting has a special ceremony for making the Promise called Investiture or being invested. When a young person makes their Promise they receive their Group Scarf, The Membership Award (for those coming into Scouting for the first time) or their Moving-On Award (if they have been in Cubs) and are welcomed as a new Member into the Scout Family.

What do Scouts do?

Scouts normally meet once a week for a couple of hours. It is an opportunity for them to catch up with friends, learn new skills and explore issues relevant to their age group. They will also have their chance to say what they want to do!